Your Child’s Sippy Cup….Could there be Problems?

Your Child’s Sippy Cup: Is it a Friend or Foe? 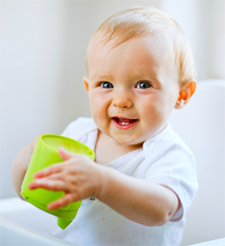 Shaped like your child’s favorite action heroes and in every vibrant color imaginable, sippy cups seem like an innocent way to prevent spills. But with increased cavities and speech issues abound, pediatric dentists have recent research suggesting that what was once a friend is now a foe.

Of course, sippy cups can play an integral role in your child’s development. But in light of these recent developments, it’s important to know how to properly use them and to be aware of potential problems that can occur due to misuse.

How are Sippy Cups Supposed to be Used?

Sippy cups are a parent’s dream. After all, they allow children to take care of themselves and transition to adult cups easier than they would otherwise be able to. However, sippy cups weren’t developed or intended for prolonged use, no matter the level of convenience they offer.

In fact, sippy cups should be used as a transitional tool to wean children off of bottles until they’re able to use an adult cup. Most often, this means that sippy cup usage should stop between the ages of one and two, depending upon a child’s motor development.

Many parents understand that sippy cups can be problematic when used improperly, but not as many recognize the primary health concerns that can surface due to improper use:

Turning a Common Foe Back Into a Friend

A quick online search will turn up dozens of articles telling you that sippy cups are an absolute foe, but it isn’t that simple. While it’s true that sippy cups can cause problems, proper usage makes them a friend and asset as you transition your child into adult cups.

So, how can you turn this foe into a friend once again? Here are a few suggestions:

Friend or Foe: You Decide

A sippy cup can be your best friend or worst enemy: it all depends on how you use it.

By keeping the tips above in mind, your little one can enjoy his/her favorite sippy cups and you can rest assured that his/her teeth and development won’t be derailed in the process.